There are two kinds of people. The ones who want to be noticed and the ones who want to be inconspicuous. The light up shoes are clearly for the kind of people who want to be noticed. People who go to the disco with such shoes are definitely among the eye-catchers. But these sneakers are not only suitable for dancing, but also for jogging or chilling. The LED light up shoes are also available in two different versions. In one case the whole shoe is illuminated, in the other only the sole. Before you decide, you should know a few things.

Small LEDs are built into the luminous shoes. These are supplied with energy by an accumulator or a battery. Batteries have the big disadvantage of not being rechargeable. This is of course very counterproductive. That is why rechargeable batteries have established themselves.

Depending on which vintage you are, you will still know the flashing shoes. These were sneakers that came on when you moved and blinked. These were equipped with small batteries and when these were empty, the shoe did not blink anymore. You were forced to buy a complete new shoe… those were the days. Today you can charge your shoes with a USB cable. The cable has two connectors so that you can charge both shoes at the same time.

The charging time takes between 2-4 hours on average. The light effect lasts between 8 and 14 hours. You can activate the effect by pressing a switch on the inside. Meanwhile there are so many different models. There are some that can change between 12 colours. Then there are also some that can blink.

And there are also really cool ones that change color when shaken (e.g. by jumping). So a kind of mobile disco light. These are just a few examples. You can’t imagine what else there is. But there is one problem: The switch. Often it happens that users activate it by mistake and in some situations this is really stupid. So far one manufacturer has a solution. He solved it by simply developing an app that is connected to the shoe. Unfortunately, that’s not the only problem that the illuminated shoes have.

LED’s fine. In fact, it is the longest lasting light source. This means that it is quite robust. The same applies to the battery. But both have their limits. Especially cheap shoes suffer from the phenomenon of failing after a few weeks. This can have several reasons. Either the LEDs have given up the ghost or the battery or the cables. Whatever the reason, it is very annoying. There are exactly two reasons why something like this can happen:

1. The installed parts are of inferior quality

2. The parts have too much space and can move. Consequently, vibrations are perceived much more strongly and this leads to damage.

You can’t really protect yourself from such mispurchases. The best way is to trust the opinions of your customers. In addition, expensive products should be of better quality (emphasis is on: should). Who thinks now: “Such LEDs don’t cost much, I’ll buy some more and just replace them” is wrong. Just like with the flashing shoes of that time, the illuminated shoes cannot be repaired…unfortunately.

IF YOU WANT TO BE BEAUTIFUL, YOU HAVE TO SUFFER

I explained to you earlier that more expensive flares last longer. That’s true, but only if you pay attention to a few things. First of all, you should be more careful with the more expensive sneakers. Meaning: you shouldn’t necessarily do a parkour run with them. The shoes are water-repellent, but must not be cleaned with water under any circumstances!

Makes sense, doesn’t it? Well, anyway, retailers recommend cleaning the shoe with shoe polish. Besides, illuminated shoes are no ordinary outdoor shoes. They should therefore be added to your shoe rack and not replaced. When you are about to buy glow shoes, pay attention to the shoe size. Preferably one size bigger.

WHAT ADVANTAGES DO LIGHT UP SHOES HAVE

Of course the effect is first and foremost something special. But the shoes also give a kind of security, whether it is when cycling, motorcycling or jogging. The drivers can recognize you better, and so the risk of being hit by a car is minimized. It is more likely to happen that drivers are even distracted and take another pedestrian with them – Murphy’s law. Back to the topic. If you drive a penny board LED, this will look great in combination with light shoes. Nonetheless, they will still be trendy in 2022.

The idea is new. So new, in fact, that the selection is limited, and in shoes… It’s not something you see often. Remember the search query: high heels… An infinite number of shoes. People who are looking for brand name shoes are unfortunately in the wrong place. Well-known brands like Adidas or Nike did not get on the Hypetrain. Nevertheless, this is not really necessary here.

Tip: buy the shoes on the Internet, because the choice is bigger there.

As I already mentioned above, the materials tell you how good the light shoes are. Most shoes are made of imitation leather. This has the advantage that they are water-repellent and this is highly recommended, because electricity + water = nothing good.

Then you have to distinguish between high top and low top shoes. High Top are shoes that go up to the ankles. They are mostly lined and are perfect for the winter. In contrast, low tops are airy and are therefore suitable for the summer.

Tip: If you plan to wear glow-in-the-dark shoes exclusively in the disco, it is advisable to wear low tops, because it can get quite warm when dancing.

The prices for sneakers range between 20§ and 120$. I could say: If you buy cheap, you buy twice. But honestly, I wouldn’t buy the most expensive ones. The reason for this: no matter how good the quality is, they too will eventually give up the ghost.

LEDs are not designed to withstand jumps. The survival time of such mountain pines is, depending on use, between one day and 2 years. Okay, maybe that’s a little too imprecise. If you’re planning to party hard and have a 36 hour rave every weekend, they probably won’t last more than two months.

Since I don’t expect you to be that into it, you can expect up to two years, depending on the price range. To come back to the price, I would not overreact and buy the cheapest ones, because it can happen that the LED shoes arrive defective and the dealer answers with “I don’t know” and there might be no exchange.

FOR WHOM ARE LED SHOES SUITABLE?

Age knows no bounds. Or rather: Fashion knows no age limit. It doesn’t matter what you call it. At the moment the demand is highest among young people. Second are the ladies. The third place is occupied by men and children. The fact is that everyone who likes to dance or who wants to use the illuminated shoes for safety reasons will enjoy these sneakers. It makes no difference whether you are 12 or 50 years old.

I think everyone who likes to dance, likes lights, wants to stand out and/or wants security will clearly have a lot of fun with them. In fact, there are few things that speak against LED shoes. So what’s wrong with them? They serve as a kind of fashion accessory.

In other words, they can be worn on given occasions, but nobody forces you to wear them. Another aspect that speaks for the LED shoes is that singles have the possibility to get into conversation in this way. Sounds a bit weird, but has actually happened to a few people. The shoes give others a reason to talk to you, to get into conversation. So you have to break out the old “Do you have a light… Oh, and by the way I’m …” Phrase. So if you are up for the shoes, 40$ is suddenly not so much anymore, even though you are broke ;).

Light up shoes to check out 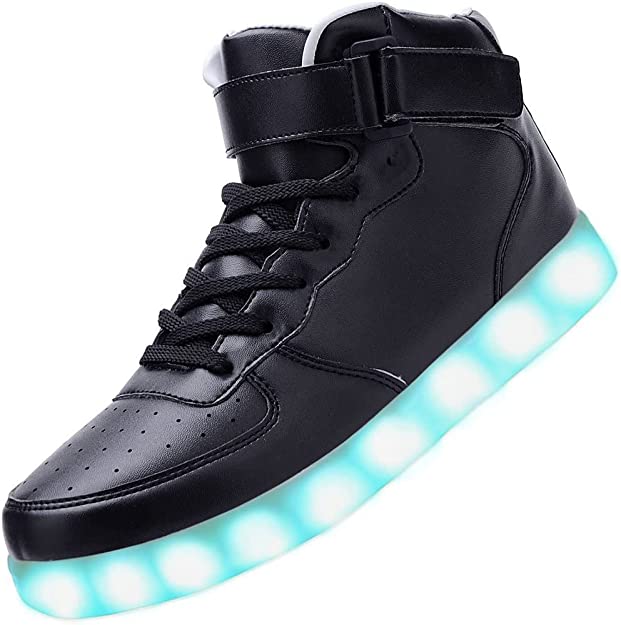